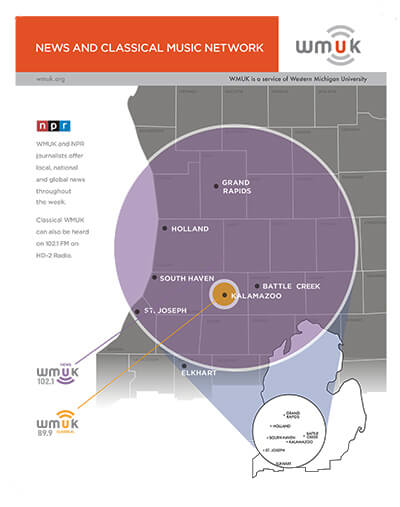 Western Michigan University’s WMUK-FM (Kalamazoo) has announced that it is expanding both its news and information programming as well as classical music and fine arts programming with the addition of a second frequency.  On January 20, the station will split its programming with WMUK 102.1 increasing the amount of news and information programming hours with the addition of programs including 1A, Fresh Air, On Point, Radiolab, The Daily, The Takeaway and This American Life.  The station will be known as “WMUK News.”

The station’s current classical music and fine arts programming will be expanded on its HD2 subchannel and also be heard on WKDS-FM 89.9, a station licensed to Kalamazoo Public Schools.  This HD2/FM combination will be known as “WMUK Classical.”  WMUK Classical will still offer 5-minute top of the hour newscasts.

The station says that the changes came after listener research indicated that a clear majority of our listeners say they want more news and information, particularly at middays and they want to give more people reason to stay with their local public radio station, based and originating in Western Michigan. In sharing the news with WMUK listeners, the stations says that with the balance of local reporting and cultural coverage, in addition to new network programming and the creation of Classical WMUK, the station will provide a compelling new reason for listeners to stay throughout the day for their news, information and music needs.