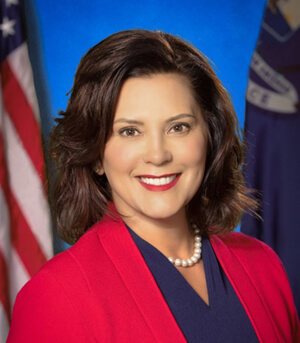 Governor Gretchen Whitmer has announced that she will deliver her second State of the State address on Wednesday, January 29.  As in the past, The MAB will offer feeds for both TV and radio of the address beginning at 7 p.m.

TV: The MAB TV feed will be unhosted, allowing your anchors to introduce and conclude the broadcast. The feed from the Capitol will be closed-captioned.

The address will be distributed to television via Galaxy 17 Ku-Band.  Full technical details will be made available on the MAB website as soon as they become available.

Commercial TV broadcasters should have received a clearance survey.  If you have not already filled it out please do so and get it in. We want as many stations to air the program live as possible to show the Governor the power of Michigan Broadcasters.  The survey is here.  If you need any additional information, contact Dan Kelley at the MAB: dkelley@michmab.com.

RADIO:  MAB is proud to offer to commercial stations the hosted Michigan Public Radio Network Broadcast which will be fed via streaming Internet or is available for stations to pick up off-air from their nearest MPRN affiliate station.  The MPRN broadcast will air from 7:00 p.m. straight up to 8:28:59 p.m.  The broadcast will be anchored by MPRN’s Rick Pluta and Laura Weber of WDET-FM (Detroit).

GOP Response: We have been advised that there will be no GOP recorded response; instead there will be a press release issued either the evening of the address or the next morning.

If you are unable to carry the State of the State Address on one of your channels, you may record and tape delay it to be played at a more convenient time. We are trying to get at least one TV and one radio station in each market to carry it live.

Broadcast details will be provided as they become available on the MAB Website.