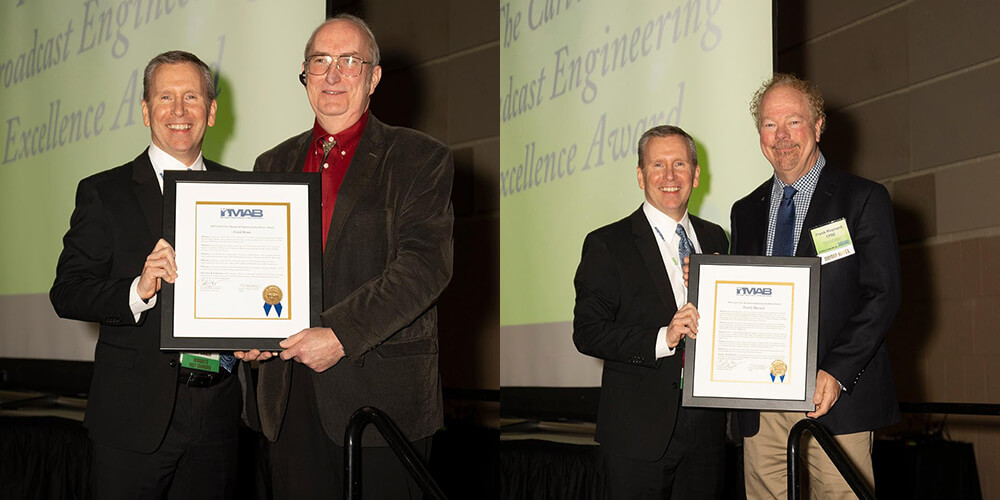 The Michigan Association of Broadcasters (MAB) presented its most prestigious engineering award during the Great Lakes Media Show on March 4 at the Lansing Center. The Carl E. Lee Broadcast Engineering Excellence Award was presented to Upper Peninsula Radio Engineer Coral Howe and Frank Maynard, Supervisor of Technical Operations for WKBD-TV and WWJ-TV in Detroit.

Coral Howe is the Director of Engineering for Sovereign Communications, which owns seven radio stations in the eastern portion of the Upper Peninsula. He also maintains five other radio stations owned by other entities. Howe’s Michigan broadcasting career started in 1990, when Goetz Broadcasting hired him as a part-time engineer to maintain three stations in Marquette and Ishpeming. In 2004, he has hired full-time for Northern Star Broadcasting. Howe served in the U.S. Air Force for 20 years as an Airborne Electronic Technician and as an air traffic controller. Howe enjoys spending time with Brenda, his wife of 46 years. They have three daughters and six grandchildren.

Frank Maynard is the Supervisor of Technical Operations for WKBD-TV and WWJ-TV, the Viacom CBS owned stations in Detroit. Franked joined WKBD in 1985 as a videotape engineer. During his tenure, he has been responsible for major studio projects including control room design, studio construction, newsroom automation, and integrating the master control systems to implement the first merger of the two stations. Early in his career, Maynard was Chief Engineer for stations in Lansing and New Orleans. He currently serves as a Chair of the Detroit Section of the Society of Motion Picture and Television Engineers . In his free time, Maynard is an active amateur radio operator and is still active in the Boy Scouts. Maynard enjoys spending his free time with his wife Lisa, and their two sons.

The Carl E. Lee Broadcast Engineering Excellence Awards was named after Carl E. Lee, a prominent Michigan broadcast engineer and station owner, who was known for his innovation and recognition of opportunity. Broadcast engineers work diligently to ensure the integrity of our airwaves. For those who have exercised their skills and innovations for the advancement of technology, this is our opportunity to say “you’re outstanding.”