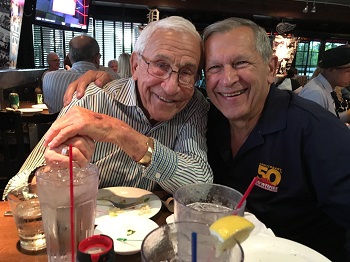 Seymour, who started in radio as a child actor on the Detroit-based Lone Ranger Show, began working at WJBK-AM as a teen.  He then headed to WKMH-AM, which later became known as WKNR.  He also hosted the local teen dance TV show “Swingin’ Time,” seen on CKLW-TV.  He frequently hosted the popular “Robin Seymour’s Original Rock ‘n’ Roll Revue” at the Fox Theater in Detroit.

Seymour introduced up-and-coming local artists on his show, including Stevie Wonder, The Four Tops, Martha and the Vandellas, and The Supremes. Seymour was the driving force behind KDB (Keep Detroit Beautiful) Teens in 1968. He spearheaded several beautification projects around Detroit with a kickoff concert at Detroit’s Cobo Arena.

Born in Detroit, he graduated from the city’s Central High and attended Wayne State University.  He served with the Armed Forces Radio Network during World War II.  In 2019, he chronicled his career with the release of the book “The DJ That Launched 1,000 Hits.”

Art Vuolo, Jr. told the MAB “We lost him, a month after he turned 94….but his memory, and the signal will go on forever and ever!”

Seymour is survived by two daughters, two nephews, a grandson and great-grandson.   His family does not plan to hold a funeral.