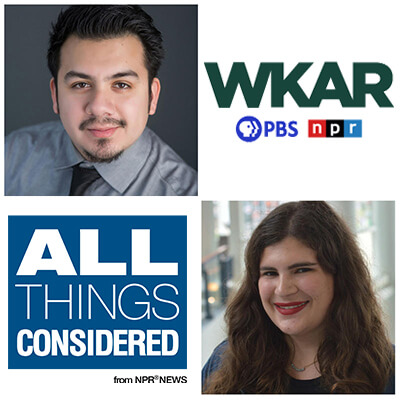 Vega joined WKAR in January 2017 and has been ATC’s local host since July of that year. In his new role as managing editor, Vega will supervise news reporters and program hosts. Additionally, he will be responsible for the planning and editing of WKAR’s news content.

“Karel has worked hard to increase the local news content heard during ‘All Things Considered’ on WKAR,” said Drew Henderson, WKAR radio station manager. “I’m proud of how Karel and politics reporter Abigail Censky stepped up back in October 2019 to fulfill the duties of managing editor, while still being responsible for daily hosting and reporting tasks. I’m excited to see what Karel will bring to the role of managing editor of WKAR News in a full-time capacity.”

Sophia Saliby will take over as ATC host later this month. Saliby came to WKAR in April from Georgia Public Broadcasting in Atlanta, where she served as local producer for ATC.

“I’m also excited about Sophia,” Henderson said. “She’s been on the air twice in her first week at WKAR, and I look forward to utilizing the knowledge and experience she acquired in her previous role at GPB.”

Prior to that experience, Saliby was a reporter for WFIU/WTIU in Bloomington, Ind. She has won numerous awards from the Indiana Associated Press Broadcasters Association and the Indiana Society of Professional Journalists. Saliby graduated from Indiana University with degrees in international studies and Arabic.