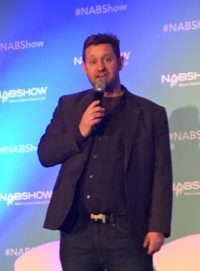 As a professional broadcaster, I can’t resist the temptation to increase the production values of my livestream videos on social media.

More and more radio DJs are livestreaming from their homes on social media as a way of engaging their audiences. But creating a compelling livestream broadcast requires more than just opening an app and pressing a button. Whether you’re just coming up with an idea for a livestream concept or you’re looking to fine-tune something that you’re already doing, here are some factors to consider:

1. Exclusive Content
With the exception of radio morning shows or talk shows, don’t simply livestream content that is designed for other mediums. Your 20-second on-air breaks are meant for the radio, not Facebook or YouTube. Use the livestream to give your audience something that they can’t get anywhere else, whether it’s a behind-the-scenes look at your broadcast or an entirely different feature.

If you are planning on using your on-air content as livestreaming content, repurpose it with purpose, not as an afterthought. In other words, think carefully about how your content works as a livestream and identify any extra steps you need to take to make it more engaging. For example, if you choose to livestream an interview with a musical artist and then air the audio on the radio, consider asking a bonus “livestream only” question or two.

For example, the airstaff of KLOS in Los Angeles gets together for a weekly Happy Hour, which allows you to see the airstaff interact in a way that you can’t hear on the radio:

2. Audience Engagement
One of the key things that makes livestreaming different from broadcasting on the radio is that the audience can make text-based comments and you can react in real time (at least, as close as to real time as the streaming lag will allow). When you design your livestream content, don’t think of it as a one-way broadcast like your radio show; instead, identify opportunities to make it a two-way street by soliciting and incorporating comments from viewers. For example, if you’re hosting a discussion on homeschooling tips for parents, invite the audience to leave comments with their tips, and read a few during your stream.

Watch as The Rizzuto Show on 105.7 The Point in St. Louis displays comments on the livestream video for all to see, which in turn encourages other people to comment:

3. The “Play Along at Home” Factor
When I was a program director, I had a rule for all the on-air contests: They had to be just as engaging for the 99% of our listeners who were not participating. We called this the “Play Along at Home” factor. We never once held a “Caller #9” contest, because while that might be interesting to the active callers, it holds no interest for the rest of the passive audience.

When you livestream, you also want to consider the active participants and the passive viewers separately. The active participants are the ones who leave comments; the passive viewers are the one who don’t. Make sure that your livestream content is enjoyable for both groups. Trivia is a great way to do this because audience members can play along in their own heads even if they aren’t playing the game for real. Jeremy, the afternoon host on Alt 94-9 in San Diego, hosts a daily trivia competition:

4. Continual Entry Points
When people listen to a podcast episode, they always start with the first second of that episode. By contrast, a livestream video is like your radio broadcast — people may tune in at any given moment. If they scroll past your video in their social media feed, they may play a few seconds and, if it doesn’t grab their attention, they’ll move on. This means that you need to constantly hook people in.

The way to do this is to constantly reset the show to make it accessible for people who are just tuning in. This is a familiar concept for radio DJs who stretch bits across multiple breaks: “If you’re just tuning in, we’re talking to Sara, who wants to know if she should break up with her boyfriend after she discovered that yada yada yada.”

On a livestream, you have additional visual tools that can do even more to make the stream accessible to newcomers. For example, you can use a banner overlay: “Should Sara dump her boyfriend?” Don’t assume that people are watching your video from the beginning; take full advantage of both your audio and visual components to provide as many on-ramps to your broadcast as possible.

5. Longer Can Be Better
Because people are likely to discover your livestream as they scroll through their social media feed, a longer broadcast is more likely to be found than a shorter one. That’s why Facebook prioritizes streams that are at least three minutes long. As radio broadcasters, this runs counter to our conventional way of thinking; we’ve been trained that Nielsen ratings favor shorter breaks. And while Facebook’s algorithm shouldn’t be misinterpreted as a license to ramble endlessly, it does mean that coming up with longer content can increase your chances of success with livestreaming.

6. Production Values Matter
While livestreams on social media don’t come with the same audience expectations as radio or television when it comes to production values, better is always, well… better. Make sure that your livestream looks good and sounds good. Here are some tips. And remember, while you can always livestream using a native social media app, a third-party app provides opportunities to up your production game.

Shawn Tempesta, the afternoon host at Mix 94.1 in Las Vegas, has invested more than the average bear in both hardware and software for his livestream broadcasts, and it shows:

8. Set a Consistent Schedule
This is no surprise to media professionals: consistency matters. Whether you livestream daily at the same time or weekly on the same day, set up a regular schedule and promote that schedule to your audience.

9. Promote Before and After
As radio broadcasters, we’re used to talking about what’s coming up, but we don’t often look back at what we’ve done. With livestreams, you can schedule the event in the future and share it on your Facebook page or other social media account, but don’t forget to promote it after the fact as well. Consider posting the recording to YouTube, embedding it on your station’s website, sending it out in an email blast and sharing the best excerpts on social media.

10. Know Your Call to Action
While livestreaming is giving air talent entirely new ways to be creative in front of audiences, never forget that the vast majority of your station’s revenue comes from advertising on your terrestrial signal. Given the hit that radio station sales departments are taking right now, you’ll want to use the livestream to promote on-air listening. In particular, let people know that they can stream your station through the website, mobile app and/or smart speaker. You can do this through verbal mentions, on-screen text, or even short video bumpers.

The art of creating a compelling livestream requires a lot more than just pushing a button and talking. The longer this pandemic goes on, the more important this skill will become, so invest the time now to step up your game.


Posted in Digital/Social/Web, May 2020 and tagged Issue 197
Scroll To Top