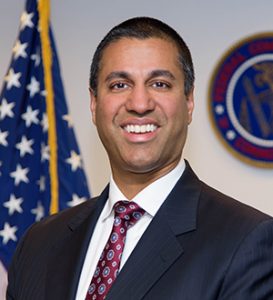 As calls for racial justice draw headlines across the nation, FCC Chairman Ajit Pai told InsideRadio on Tuesday (6/9) that growing diversity in radio ownership is the prime reason he pushed the a  radio incubator program in a recently completed quadrennial media ownership review.

“Having traveled everywhere from poor communities of the Delta of Mississippi all the way to Alaska villages above the Arctic Circle, it was important to me that our policies here reflect and are informed by the concerns of diverse communities that make up the American fabric,” he said Tuesday. Pai told Inside Radio it’s a prime reason why he pushed for a radio incubator program in the most recently completed quadrennial media ownership review. “It had been talked about for over two decades prior to my chairman. We actually got it done,” he said.

The rift between diversity and media ownership has been drawn to the forefront in recent days by Commissioner Geoffrey Stark, who has advocated for policymakers to “do more” to include black people and other communities of color. Pai said making his agency’s policies more inclusive has been a focus since he became the chairman of the FCC three years ago.

But after the U.S. Court of Appeals for the Third Circuit last September blocked media rule changes from taking effect, the incubator program is now in limbo in clear frustration to Pai. The ruling blocked the incubator program too after Multicultural Media, Telecom and Internet Council (MMTC) and National Association of Black Owned Broadcasters (NABOB) sued to block the rules dictating how established broadcasters could use the waivers they receive as a reward for participating.

“A very unfortunate aspect of that decision was essentially vitiating the incubator program which would have helped many minorities get into the broadcast business,” Pai said.

In April the FCC and the National Association of Broadcasters petitioned the U.S. Supreme Court to overturn the appeals court decision but a decision on whether to hear the case isn’t expected until later this year.

“Could we do more? Yes, I think we could,” Pai said . But until what he called the “roadblock” that the Third Circuit has put up is dealt with, Pai said there are only so many options open to the FCC.

Commissioner Michael O’Rielly had lobbied for the radio incubator program to be expanded to television as well as radio, a suggestion that ultimately failed to secure enough support as other commissioners wanted to wait and see how well a radio incubator would work before creating a TV-focused program.

As the court battle moves forward, diversity advocates still have a direct line into the FCC. When he assumed the chairmanship in 2017, Pai reconstituted the Advisory Committee for Diversity and Digital Empowerment which had been allowed to disband under former Chair Tom Wheeler. Last year Pai chartered the group for another two-year term. Unlike some Washington groups, the Diversity Advisory Committee has had several results inside the FCC, including playing a pivotal role during the recent formation of the radio incubator program.

“My goal is to make sure every American has an opportunity to participate in the broadcast business, which historically has been a great springboard for minorities who want to enter the communications industry,” said Pai.