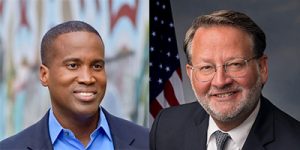 One Nation, a nonprofit organization affiliated with the GOP super PAC Senate Leadership Fund, reserved $4.5 million in television, radio time and cable advertising that began airing across Michigan on Wednesday (8/19), according to a report in Roll Call.

It is the group’s first advertising buy this cycle in Michigan’s Senate race between incumbent Democrat Gary Peters and Republican challenger John James. They came during a week when Peters’ profile was on the rise both at the Democratic National Convention and in a today’s hearing of the Homeland Security and Governmental Affairs Committee, where he is ranking Democrat as it probes into U.S. Postal Service’s finances and operations during the pandemic and in the upcoming elections.

Although this week’s effort is the first for One Nation, other outside groups have already invested heavily in the race, with about $16 million spent so far, according to the Center for Responsive Politics.

Summer polling has had Peters up by as much as a 10 point margin but  Politico recently reported an internal poll of the James’ campaign showed James down by fewer than 5 points. James has outraised Peters in recent quarters, but as of July 15, Peters reported nearly $12 million in its bank compared to James’ $9.2 million.