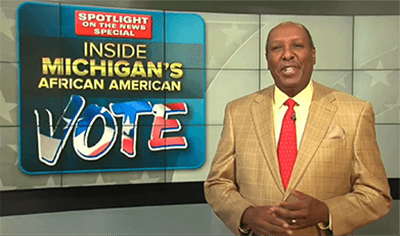 Scripps Media’s WMYD-TV (Detroit) is airing a series of special programs leading up to the November election that explores the impact of the African American vote on the outcome of the election and the future of Michigan. The series “Inside Michigan’s African American Vote,” airs Sundays at 11 a.m. on WXYZ through Nov. 1, 2020.

The shows includes conversations with political experts, award-winning journalists, civil rights activists, religious leaders and leaders of Michigan’s Democratic and Republican parties. The programs will be produced and hosted by WXYZ and WMYD Editorial and Community Affairs Director, Chuck Stokes.

“The show is an innovative approach to create relevant content for our viewers as they look to make decisions during this important election,” said Mike Murri, WXYZ and WMYD vice president and general manager. “We’re proud to provide this award-winning series to our viewers.”

The first show in the series aired in October and was honored in 2019 with a Salute to Excellence Award from the National Association of Black Journalists. The award was given to original program, “Spotlight on the News: Inside Michigan’s African American Vote,” in the television top 15 market category for public affairs interview/discussion.