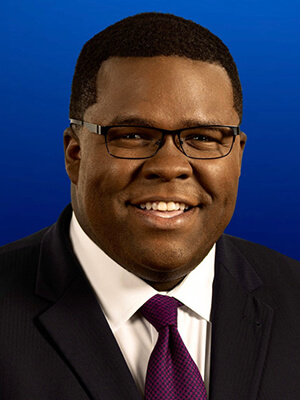 WOOD-TV (Grand Rapids) anchor Leon Hendrix has announced plans to leave the station after more than 13 years.  Hendrix started in the News 8 newsroom in June of 2007 as a weekend overnight associate producer. He rose through the ranks to his current role as weekend evening anchor.

In a memo to staff, WOOD-TV News Director Dan Boers highlighted Leon’s recent work on the anchor desk during unrest in Grand Rapids this summer.

“He was there when our viewers needed him most. Leon carefully guided our community through a truly shocking moment in our history,” Boers said. “He masterfully reported for nine straight hours from the anchor desk. It likely was a record number of continuous hours as a solo anchor in the WOOD-TV chair. It also was a night where he chose his words carefully. He understood the emotion. He understood the impact. He understood the need for that calm voice of reason in a night of chaos and demands for change.”

Born and raised in Grand Rapids, Leon describes his time at WOOD-TV as a “dream that came true.”

“Coming up with the words is difficult — but two keep coming to mind: Thank you,” he told viewers on his Facebook page Sunday. “There comes a time for a new chapter, and for me and my family and my career, we’ve decided that time is now.”

He plans to announce his next career move soon and will continue to engage with those who follow his Facebook page.