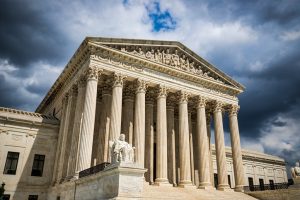 The Supreme Court has agreed to hear the appeal by broadcasters and the FCC of an appeals court’s rejection of the regulatory commission’s most recent attempt to deregulate broadcast ownership, according to a recent report in Broadcasting+Cable.

In April, broadcasters and newspaper publishers petitioned the nation’s high court to review the Third Circuit Court of Appeals decision vacating most of the FCC’s effort to deregulate broadcast ownership, including the elimination of the newspaper-broadcast cross-ownership rules.

Echoing the FCC’s petition, media petitioners said that outdated ownership rules remain in force because a divided panel of the court has prevented the FCC from implementing “necessary adjustments to its ownership rules” that the FCC concluded would serve the public interest.

The FCC said the most recent decision to vacate “a host of significant rule changes” was based “solely on the ground that the agency had not adequately analyzed the rules’ likely effect on female and minority ownership of broadcast stations.”

The FCC and Third Circuit have been sparring over successive attempts to deregulate broadcasting for most of two decades. This is the first time the Supremes have gotten involved.

“I am very pleased that the Supreme Court has agreed to review the Third Circuit’s Prometheus decision, which vacated the FCC’s long-overdue reforms of its media ownership rules,” said FCC Chairman Ajit Pai.

“This is a breakthrough – a real chance to finally have media ownership rules that better match today’s realities. For 17 years, the same divided panel of the Third Circuit has repeatedly frustrated the FCC’s efforts to amend its rules to allow broadcasters to compete in today’s dynamic media marketplace. Upon review, I hope that the Supreme Court will affirm the FCC’s reforms, which empower struggling local news outlets to thrive in today’s increasingly competitive media landscape.”