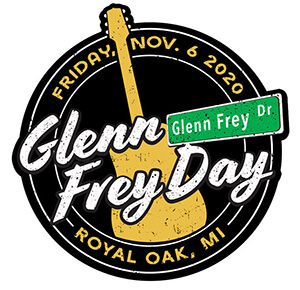 Beasley Media Group has announced that WCSX-FM (Detroit), in conjunction with the Mayor of Royal Oak, will proclaim Friday, November 6, 2020 as “Glenn Frey Day” in honor of the late Eagles co-founder and Michigan native.

Station Morning Show Personality Jim O’Brien from Big Jim’s House Morning Show will broadcast live on that day from 6 – 10 a.m. on Glenn Frey Drive in commemoration of the late singer/songwriter’s birthday. In addition, O’Brien will join the Mayor of Royal Oak, Michigan Mike Fournier, in officially proclaiming “Glenn Frey Day” as well as share stories about the late Rock and Roll Hall of Fame inductee from Detroit legends Bob Seger, Alice Cooper and others.

The broadcast location marks the spot where Frey attended and graduated from high school in 1966. It also served as the home of his first band “The Subterraneans.”

A special t-shirt, commemorating the event will be available for purchase at www.wcsx.com. Net proceeds from the sales will benefit the Michigan Chapter of the Crohn’s and Colitis Foundation. The organization funds research and raises awareness as well as provides education and support patients throughout the state of Michigan and Northwest Ohio. Colitis was one of the contributing factors to Glenn’s passing.

“Glenn Frey’s music began here in Royal Oak and reached out across the world with The Eagles,” said O’Brien. “Occasionally I catch myself driving by Glenn Frey Drive humming ‘Take It Easy’. He’s a part of our DNA in Detroit and this day is a well-deserved honor.”