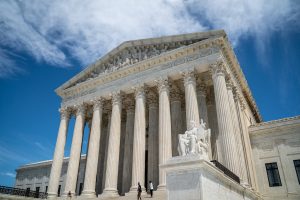 The Federal Communications Commission on Tuesday (11/17) weighed in with the Supreme Court in defense of its order deregulating local broadcast ownership and in opposition to a lower court’s invalidation of that order, according to a report in Broadcastiing+Cable.

The FCC contends that the lower court repeatedly prevented the commission from repealing or modifying rules it had concluded were no longer in the public interest.

The commission is under a congressional directive to make that public interest determination and eliminate/adjust rules that don’t pass muster.

The FCC, joined by broadcasters, petitioned the High Court to reinstate the FCC’s 2017 local ownership deregulation decision, which was overturned by the U.S. Court of Appeals for the Third Circuit, which concluded the FCC had not sufficiently gauged the deregulation’s impact on media ownership diversity.

The National Association of Broadcasters also filed its brief this week in support of deregulation and the FCC.

In its brief submitted November 17, the FCC said the Third Circuit decision “flouts well-established principles of judicial deference to the Commission’s reasonable policy judgments and freezes in place outdated regulations, to the detriment of broadcast markets nationwide.”

It said the court rejected the deregulatory moves not based on any challenge to the FCC’s conclusions about competition that drove those decisions, but on “the bare possibility that the challenged orders might affect minority and female ownership levels in the broadcast industry.”

The FCC argues that the court “impermissibly” substituted its judgment for that of the FCC, resulting in that “broadcast markets nationwide remain saddled with outdated regulations that prevent struggling traditional outlets from entering transactions that might allow them to retain economic vitality.”