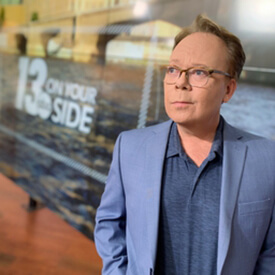 “This is a great addition to our fine staff. Teaming Kirk Montgomery with Mary Ellen Murphy will be dynamic” said General Manager Mike Toth.

Kirk grew up in Milford, Michigan and has worked in Chico, CA, Los Angeles, Tampa, Detroit, Denver and Lansing. Montgomery has won 4 Emmy Awards and has received several honors from the Associated Press. He will maintain his present position at WZZM-TV (Grand Rapids) in addition to news and co-host duties at 92.1 WGHN.

Appearing in several independent films, a few soap operas and prime time TV, Mongomery has recorded “epic, don’t blink or you will miss him” performances. He has made a number of CD’s for charity, is an accomplished still photographer and is a self-proclaimed sci-fi geek.

Kirk brings a wealth of news experience to his partnership with Mary Ellen Murphy and Good Morning Grand Haven. Murphy’s on-air experience is extensive. She got her start in Monroe, Michigan at WTWR. Murphy worked in Ann Arbor before landing in Detroit where she worked for over a decade. She has been a fixture on the West Michigan airwaves for over 20 years.