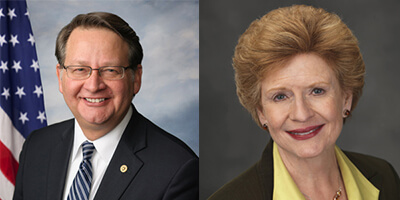 Both of Michigan’s U.S. Senate members could end up chairing committees soon with a razor-thin majority in the chamber once Georgia’s runoff elections that were held Tuesday are certified as the two Democratic candidates there are projected as winners, according to a report in Gongwer.

For U.S. Sen. Debbie Stabenow (D-Lansing), she is the ranking member of the U.S. Senate Committee on Agriculture, Nutrition and Forestry. Stabenow served from 2011-15 as the agriculture committee’s chair. Under U.S. Senate rules adopted in the 1990s, members are limited to a six-year term on chairing a committee and, when in the minority, serving as its ranking member.

On Tuesday there were runoff elections in Georgia for both of that state’s U.S. Senate seats. As of Wednesday, Democrats Raphael Warnock and Jon Ossoff were projected to narrowly win their races over their incumbent Republican opponent. Once their victories are certified and the two Democrats are seated, the U.S. Senate would be split 50-50 between the two parties. Because Democrats also won the White House in the November 3, 2020 election, Vice President-elect Kamala Harris would be able to cast a deciding 51st vote in the event of tied votes.