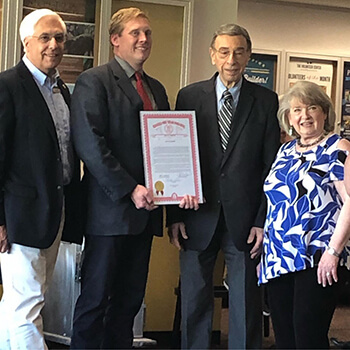 Bruce Turner, who is known for his legendary impact on public broadcasting in Upper Michigan, has died.  According to Eric Smith, Director of Broadcast & AV Services at NMU, Turner died Saturday (1/9) following a brief illness. He was 82.  Turner retired from NMU in 2019 following a 56-year career as WNMU-TV’s original station manager. In the 1960’s, he provided leadership for the construction of our broadcast studios in Harden Hall, created the station’s student-run “Public Eye News” program and worked tirelessly to bring PBS cultural and educational programs to residents of Michigan’s Upper Peninsula.

Smith says of Turner, “Bruce was indeed a broadcast leader in the Upper Peninsula, having worked at WLUC-TV before joining NMU. The MAPB previously recognized his service with a Broadcast Pioneer Award. As many of you know, Bruce served as chair of our programming committee for many years and was well respected as a “go to” person resolving underwriting policy issues.”

In a 2019 interview with WLUC-TV (Marquette) Turner said, “I’m thankful for Northern [Michigan University] for the greatest experience of my life.”  Before his time at WNMU, Turner also worked for WLUC-TV in the 1960s.  His career started in his youth in his hometown of Sturgis, Michigan. Turner interned at a jewelry store that advertised on local station WSTR. The station owner spoke with a Southern drawl and used to record the commercials himself. But Turner’s boss, impressed with his young charge’s voice, said, “Bruce could do better.” He did, and a broadcaster was born.

Bruce is survived by his wife Mary and several children and grandchildren. Service arrangements are incomplete but should follow in the days ahead.