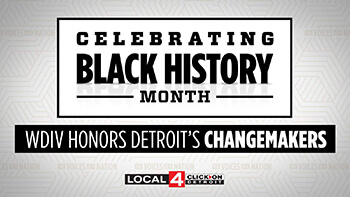 Throughout February, viewers from early morning to late evening will see a wide range of stories and profiles in various newscasts and programming on ClickOnDetroit showcasing Black successes, struggles and changemakers.

“WDIV-Local 4 and ClickOnDetroit are committed to producing stories that spark meaningful conversations about our history, race, and equality,” said Marla Drutz, Vice President and General Manager. “We believe that the diversity of our audience, region, and country needs to be represented in our reporting throughout the year. And, February is always an opportunity to go deeper into highlighting the richness of the Metro Detroit African-American community and the contributions to our collective history.”

Anchor Kimberly Gill will explore the history of Black History Month itself and code switching, meaning a person changing the way they speak or act based on the social context.

Anchor/reporter Sandra Ali highlights two changemakers who are at the center of politics and elections in Michigan, Lt. Governor Garlin Gilchrist and Sommer Woods, the election worker who confronted the GOP election challengers at TCF Center in Detroit.

Reporter Paula Tutman will continue her in-depth reporting on asking whether the time has come to change how black history is taught in our schools beyond the chapter on slavery.

Morning anchor Rhonda Walker is working on stories about Underground Railroad locations many Detroiters may never have known about, and the real story behind Dunbar Hospital, the first hospital to serve Detroit’s Black community. “Local 4 News Today” co-anchor Evrod Cassimy will report on the historic jazz club Baker’s Keyboard Lounge, the legacy of the Buffalo Soldiers, and has a look at what visitors can do at the Motown Museum outside of in-person tours.

Anchor/reporter Priya Mann takes us on the Black Scroll Network History Tour and shows us how the tour of important places and people in Black History continues even through the pandemic.

“Understanding and celebrating the remarkable stories of Black America and Black Michiganders helps viewers have better context to the complicated reality of the American experience. We felt it was incredibly important to have many of our reporters and anchors be active participants in our comprehensive coverage,” said News Director Kim Voet.

The mid-morning lifestyle show “Live in the D” will also celebrate Black culture by exploring the history of Detroit’s Avenue of Fashion which was a hub of music and commerce for Black musicians and entrepreneurs. Other segments will showcase the first Black-owned tequila company, the author of Invisible Men: The Trailblazing Black Artist of Comic Books, Tuskegee Airmen Museum’s effort to teach the next generation of pilots through virtual classes and more. Co-hosts Jason Carr and Tati Amare will join “Live in the D” reporters Kila Peeples and Michelle Oliver in celebrating Black History Month all throughout February.

“We will feature poems and writings of some of our most prolific young artists. InsideOut Literary Arts Project is an award-winning organization that really inspires anyone who is lucky enough to experience the writings of these Detroit students,” said Jamie Kaye Walters, Creative Services and Programming Director.

“For our Local 4 and ClickOnDetroit staff, we are creating opportunities for discovery and discussion through our newly created Local 4 Book and Movie Club. This month we will invite interested employees to read a book and watch two movies then participate in a virtual discussion with their co-workers,” Drutz said.