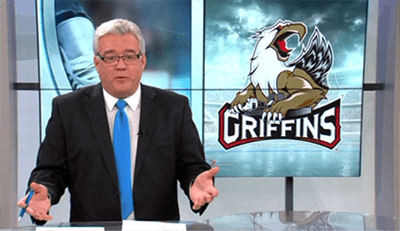 Nexstar’s WXSP-TV has announced that it will air all 15 Grand Rapids Griffins home games this season.  Larry Figurski of sister station WOOD-TV will handle play-by-play duties while Bob Kaser, the voice of the Griffins, recovers from his recent open-heart surgery. Figurski will be joined by commentators Lou Rabaut, a longtime analyst on Griffins broadcasts, and Mike Knuble, the Griffins’ assistant coach.

“WXSP televised the two most memorable games in Griffins history – Game 6 of both the 2013 and 2017 Calder Cup Finals – and worked with us last June to rebroadcast our most recent championship on its three-year anniversary,” said team president Tim Gortsema. “The opportunity to televise every home is exciting, and we are grateful for WXSP’s commitment to the Griffins. Our continued partnership ensures that Griffins fans in West Michigan have a convenient way to watch every home game this season, even if they can’t do it from a seat in Van Andel Arena quite yet.”