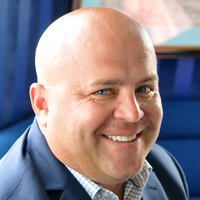 Kevin Dunaway, who spent 22 years with Heritage Broadcasting TV stations in Traverse City and Cadillac, was named VP of affiliate relations and content development for VUit, the over-the-top streaming service featuring programming from local stations, according to a report in NextTV.com.

In his new position, Dunaway will educate local broadcast stations on the value of VUit, and help them create innovative OTT programming for the service. He’s also overseeing VUit’s in-house production efforts that serve as proof-of-concept for stations, and VUit’s “Studio 39” and live street camera in New York City.

At WWTV, Dunaway pushed the envelope while pushing content over the top, including broadcasting more than 10 hours of the I-500, a Michigan snowmobile race.

Dunaway started as news producer at WWTV, owned by Heritage Broadcasting, moved up to news director in 2000 and general manager in 2016. He has served as a member of the MAB Board of Directors, most recently as Vice Chair/Chair-Elect.

Dunaway said VUit will help stations take advantage of the creativity they have in their newsrooms and show them that putting programming on OTT is easy, there’s demand among consumers and that it gives stations an extra opportunity to sell commercials.

He’s moving from the station world to OTT because “this is a space that I decided I really want to be in because I believe there’s a great future there.” he said.

VUit wants participating stations to produce one or two live, original, straight-to-OTT events per month. The OTT programming creates a destination for hyperlocal programming that gives a station’s views something to watch before the switch to Netflix or some streaming service.

VUit is now available on all major streaming platforms and devices, including mobile and desktop web, iOS and Android devices, Roku, Amazon Fire TV and AppleTV.