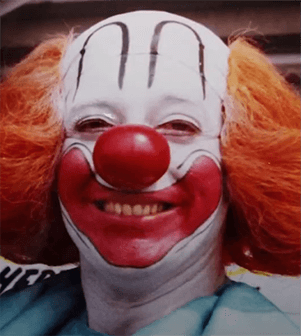 Art Cervi as Bozo the Clown.

The MAB has learned that Art Cervi, who played children’s television show host “Bozo the Clown,” passed away February 15 at age 86.  Cervi played the clown with a big red nose and red hair that protruded sideways on either side of his head, first on CKLW-TV from 1967 to 1975, then continued on WJBK-TV until 1980.

Cervi was born in Mount Pleasant, New York. He began his professional career as a manager of furniture stores in Redford and Garden City in the 1950s.  He later took a job as a board operator at an area radio station, WKNR-AM.  During his time at WKNR, he and a disc jockey developed “Swingin’ Time,” a teen dance show that aired six afternoons a week on CKLW-TV and featured top rock acts of the day.  He later auditioned for the role of Bozo.

After his television career ended, Cervi hosted a radio show about cars.  Survivors include his wife of 47 years, Suzanne; sons Mike, Nick, and Jon; and a daughter, Patricia.