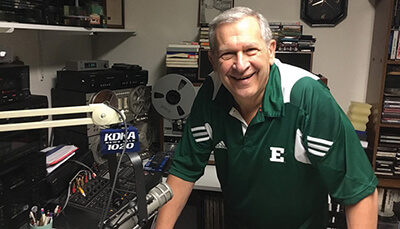 In a note to the MAB, Art Vuolo wants to thank everyone who prayed for his recent successful hospitalization for, what turned out to be serious gallbladder surgery. It should have been routine, but it wasn’t. Doctors called the condition of his gallbladder “rotten.”  The successful operation was March 9.  However, while in Ascension Hospital in Novi, there was a strange series of events that Art has shared with the MAB.  It’s a story one cannot make up:

An RN at the hospital by the name of Shelley learned of Art’s love of radio and asked if he knew Detroit legend Dick Purtan? She said he just remarried last summer.  Art said who do you think videoed the wedding? He did. So, she asked if Art knew one of Purtan’s six daughters, Joanne? He said, “Are you kidding, who do you think videotaped her wedding back in 1993?” The nurse then said “I was at that wedding! Holy cow that was you running around with the camera?” It turns out that her brother was the best friend of Eric, who was the groom (Joanne’s new husband.) Both freaked out in a truly small-world moment. Both Purtan and his daughter flipped out over the news.

Now, fast forward to the end of the week when Art was to be discharged from the hospital. During his last two days, breakfast was delivered to his room by a 25 year old young man who had major scars across his head. When asked what happened, he indicated it was a major brain aneurism when he was 17. He was lucky to have survived. On Friday, when he delivered Art’s final hospital meal, the topic of radio came up because it was his last day at the hospital before going back to college at Central Michigan University. Art told the kitchen worker, whose name badge read Jack D. that many big local broadcasters were CMU alums. He asked if Art ever listened to WWJ? Then Jack told Art his Dad worked there. His father is Rob Davidek, news director and VP of programming for WWJ NewsRadio 950 AM. Both went wild over the coincidence!

Art texted a photo of Jack to Rob and called him to hear his “over the top” reaction. He then related the story to Debbie Kenyon, market manager and SVP of Entercom Detroit, which owns both WWJ-AM and Joanne Purtan’s station WOMC-FM.  She was amazed at the bizarre series of events that tied two of her staffers into an incredible tale of six degrees of separation.

It further illustrates just how small the radio fraternity actually is. Rock on!

Thanks for sharing Art and we hope your recovery is a quick one!