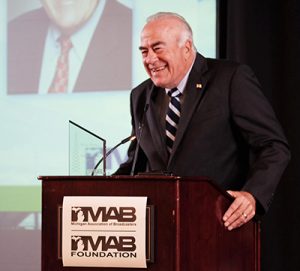 Frank Beckmann in 2015 at Michigan Broadcasting Hall of Fame ceremonies.

WJR-AM (Detroit) Mid-Morning On-Air Host Frank Beckmann, who announced his coming retirement in January, will do his last program on-air at WJR this Friday (3/26), wrapping up a 48-year radio career.  A sports broadcasting legend, Beckmann has hosted “The Frank Beckmann Show” on WJR weekdays from 9:00 a.m. to Noon for the last 18 years.

Beckmann, in an interview with The Detroit News, said “I’m coming to grips with reality. You’ve been doing this for so long, you start thinking about, you know, you’re not going to do this anymore. It weighs on you a little bit. You begin to have second thoughts.”

Beckmann first signed on to News/Talk 760 WJR in 1972. In 1981, he succeeded Bob Ufer as the University of Michigan football play-by-play announcer, a job he did for 33 seasons. He was honored as “Top Michigan Sportscaster” numerous times, and in 2014, he received the Chris Schenkel Award by the National Football Foundation, making Beckmann a member of the College Football Hall of Fame.

Over the course of his storied career, Beckmann has helped raise tens of millions of dollars for Detroit area charities, including The Fallen and Wounded Soldiers Fund; Dutton Farm, which serves those with Down Syndrome; the Autism Alliance of Michigan; and numerous other nonprofit organizations. Beckmann is also a longtime major supporter of the March of Dimes, and has hosted an annual golf tournament fundraiser for the charity for 37 years.

Steve Finateri, Vice President/Market Manager, Cumulus Detroit, said in January: “Frank Beckmann is a radio legend who became a legend because he does everything ‘full throttle.’ As a play-by-play announcer, Frank electrified audiences with his memorable style of calling all the action. As a midday talk personality, he prides himself on having the “best informed audience,” and always delivers on that promise to them. As a philanthropist, his overwhelming generosity has fortified countless worthy causes. As a spokesperson, his integrity and personal endorsements have fueled so many businesses. As an indispensable member of our team, he has helped WJR become a mega-brand in Michigan, the Midwest and throughout the country.” Finateri continued: “Frank’s career over the past 48 years has made him one of the most elite members of the media, and deservedly so. Most importantly, Frank Beckmann is one of the kindest, most honorable and passionate individuals to those who know him. He will be sorely missed, but we wish him all the best as he enjoys his next chapter as full-time family member and avid golfer!”

Beckmann commented: “I will be forever grateful to WJR for helping all of my boyhood dreams to come true. As a youngster growing up on the east side of Detroit, I always imagined sitting behind a microphone, announcing Lions and Tigers games. It was surreal for me to actually have been able to do that, along with experiencing the other great opportunities this radio giant known as WJR provided me. I only hope I’ve met some of the expectations of me, and I thank every person I’ve worked for, or with, at WJR…”

He added: “It’s been an amazing ride and while I look forward to all the upcoming additional golf time, I also know I will deeply miss the incredible, best in the business professionals I’ve worked for and with these past 48+ years. My co-workers and our clients are not only my friends; they are my family. I’d like to thank them, along with our loyal audience. Without their support, I would not have had this run. Finally, I’d like to give thanks to my family: my wife, Karen, son Jon, and daughter Tori, for the selfless sacrifices they’ve made through the years. And now that my professional sunset beckons, and while I say so long to my job, I say thanks to all of you for making my career and life more complete. My best wishes to my WJR colleagues and listeners.”