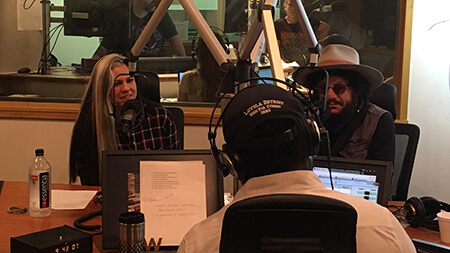 WDET-FM (Detroit) has announced that Blue Note Records President, six-time Grammy Award Winner and music industry powerhouse Don Was is launching a weekly broadcast program Friday, April 16 in his hometown of Detroit. On the new two-hour show, “The Don Was Motor City Playlist,” Was will dig deep into his music archives to curate playlists and share personal stories about the artists whose songs he features. The show will pay homage to the Motor City and artists with whom he works and loves.

The show will air every Friday from 10 p.m. to midnight and will be hosted by Was along with producer and co-host, Detroit radio personality Ann Delisi.

“This show is really different in that it is completely freeform,” says Was. “The format will be an old school stream of consciousness; diverse with songs that I love and want to share with listeners. It’s been really fun to make the playlists. I get to do this show from my birthplace of Detroit with the great Ann Delisi. You will hear stories about the Stones. Stories about Dylan. Stories about Bonnie Raitt and Iggy Pop. Stories about Detroit.”

The name of every playlist will be inspired by Don Was’ history in Detroit. As listeners tune in from around the world, they will hear commentary about the Motor City and its rich musical and cultural histories. Dubbed, “the most exciting city in America” by the New York Times, Detroit is the birthplace of Was, Jack White, Big Sean, Alice Cooper, Eminem, Elvin Jones, Pepper Adams, Marcus Belgrave, James Carter, Carl Craig, Alberta Adams and many others.

“Don Was is a genuine and fascinating storyteller who will give listeners intimate insight into music makers. Don is a Detroit treasure and so is Ann Delisi. We are thrilled that Don and Ann will be teaming up to create The Don Was Motor City Playlist on WDET,” says Mary Zatina, General Manager of WDET. “It’s a perfect trio — Don’s energy and talent in the music industry is in a league of its own. Ann, whose ear is to the ground in music of every genre, both share the ability to deeply engage listeners as they narrate stories and anecdotes about music-making. The third leg of the formula is WDET — a one-of-a-kind radio station known for innovation and eclectic offerings that inform and delight audiences in metro Detroit and around the globe.” WDET, which has been on the air for 73 years, is Detroit’s flagship National Public Radio Station.

Delisi has been a Detroit broadcaster and producer for more than 35 years. Her show Essential Music is a treasured go-to for listeners to discover new music as well as look back at landmark albums, musical moments and the musicians who created them. She has interviewed everyone from David Bowie to Adele to White House Photographer Pete Souza. Dedicated to exploring the creative spirit that drives artists, Delisi said the idea to partner with Was came up in one of their many conversations over dinner.

Delisi recounts the story of how the Don Was Motor City Playlist came about — “We were having dinner in Detroit when he was in town for the Concert of Colors global music festival. He talked about listening to WDET and the late-night show ‘Jazz Today’ hosted by Bud Spangler. He said that his dream was to do a show like that and play songs that were his personal favorites — from any genre and from any era. Months later, I suggested to my WDET colleagues that Don should host a show on WDET and everyone loved the idea.”

WDET Program Director Joan Isabella says, “Don and Ann have a deep love of music and reverence for the artists who create it. Ann is a savvy interviewer and as his co-host, she will ask questions about his work that listeners will relish. The Don Was Motor City Playlist provides a platform for Don to share his life experiences as a musician, producer and record label president. Having heard many of Don’s stories throughout the years, I know it’s going to be a blast for the listeners.”

A pivotal moment to developing the show’s potential occurred years ago when Was visited WDET to be interviewed by Delisi, only for the show to be preempted due to a national emergency press conference.

“Back in 2012, our live interview was preempted, so we ended up recording a lengthy interview in a small studio sharing stories and talking about music. In the years that followed, I began working with Don on the Concert of Colors and we would always talk about music. Little did we know that all of those conversations were preparing us for this show,” says Delisi.

“I’ve been going through my record collection, music from Detroit and beyond, on and off Blue Note,” says Was. “Maybe some music that hasn’t been released from Was Not Was but I’m modest with this show, I haven’t decided that part yet.”