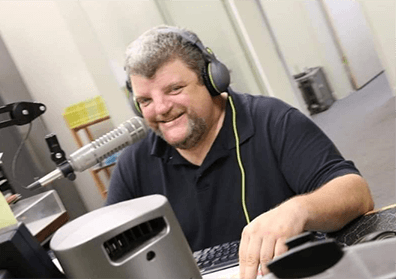 The MAB is sad to pass along word that Chris Herlein, affectionately known as “Boatman” by friends and listeners of WWKR-FM (Hart/Ludington), passed away April 18 at age 54, reportedly after contracting the COVID-19 virus. Herlein passed away at Spectrum Health Ludington Hospital.

In a article pubished in Shorelinemedia.net, his daughter Heidi Bennet recalled that as a child, she went with her father to Muskegon Fury hockey games, which he would announce on the radio. She treasured those games, and said they let her know that, while work was important, family came first.

Recalling his passion for music, Bennet said, “He would have a set of drum sticks in the car. Sometimes, when a song came on, he’d pull over and do a little solo on the steering wheel,” Heidi recalled. “The amount of music knowledge and history that he just knew, off the top of his head, was just unbelievable.”

Synergy Media, posting on the 94K-Rock Facebook page, wrote, “Boat” as he was known, began his radio career in Muskegon before moving to Ludington. He joined the Synergy Media staff in May 2010 as the afternoon host on WWKR 94.1 FM K-Rock. It will be extremely difficult, if not impossible to replace him. His experience and knowledge of music and radio, along with his dry sense of humor was enjoyed every weekday from 3p till 6p by thousands of West Michigan radio listeners. His contribution to our company and his presence will be greatly missed.”

Services will be held at a later date.