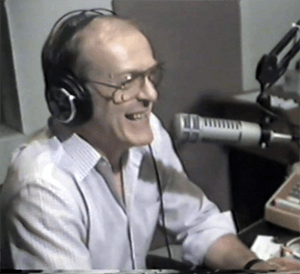 We’re not sure if there are enough radio DJ’s to fill the shoes of all of the great names who we are losing. Now, we have to say farewell to Buffalo’s first homegrown Top 40 radio star who also worked in Detroit and Denver. He segued several times between the Niagara Frontier and the Motor City gracing the airwaves of WKBW, WGR and Oldies 104 in Buffalo. In Detroit it was the monstrous CKLW, plus WXYZ and WTWR among others. He was equally well-known and popular in both cities. He also did a bandstand style TV show in Buffalo at both channel 7 and 2. He did a talk show in the early 70’s at Denver’s KWGN-TV 2, while jocking at KLZ radio.

While at CKLW, he created a feature called “Bearskin Rug Music” late at night playing soft love songs. It was a concept that has since been widely copied under different names.

Tom’s love of radio dates back to high school in Buffalo. His smooth on-air delivery, coupled with his boyish good looks made him as popular, especially with teen girls, as the rock stars of the day. Detroit’s popular Dick Purtan once quipped, at a radio reunion, that “Tom Shannon is at the hospital waiting for his next girlfriend to be born!” At night he reined supreme at WKBW in Buffalo, drove a corvette and even had actress Ann-Margret jump into his sports car for a date at a trendy downtown lounge. It was at that club when Shannon met a local rock band known as The Rockin’ Rebels. They wound up recording his radio show theme song “Wild Weekend” which became the only DJ theme to become a national hit!

Along with Shannon, Dan Neaverth and Joey Reynolds were all South Buffalo born and raised. While Tommy volleyed between Buffalo and Detroit, Danny stayed put, and Joey racked up over 38 jobs across the country. It was a time when high-profile personalities were the big draw on radio.

Tom Shannon is in the Buffalo Broadcasters Hall of Fame, and has won just about every award imaginable in the business. He was also a veteran, serving in the U.S. Army. He was diagnosed with pancreatic cancer in April, he died on May 26 with his partner Marva, and children John Michael, Catherine and Vita at his side in Salinas, CA. He was 82. As is the tradition, Art Vuolo, with a large support group, produced an incredible video tribute which you can see here::