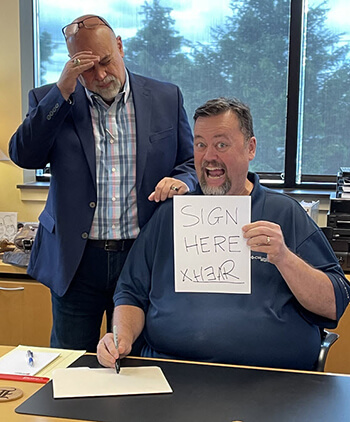 Beasley Media Group has renewed a multiyear deal with WCSX-FM (Detroit) morning personality Big Jim O’Brien. The veteran Motor City on-air personality, who has been officially serving as the morning host for the past six years, has worked at the station for a total of 18 years.

“It’s been an honor to create Big Jim’s House Morning Show on 94.7 WCSX with the support of everyone at Beasley Media Group,” said O’Brien. “Thank you to Caroline Beasley, Brian Beasley, Justin Chase, Scott Jameson and Mac Edwards. I’m very proud to be associated with such amazing professionals and can’t wait to see what the future holds.”

“The picture says it all,” said Beasley Media Detroit Vice President and Market Manager, Mac Edwards. “Pardon the pun, but Jim is a GEM! He cares about Detroit, has a passion for Classic Rock, the artists who created this amazing music, and his fellow human beings, especially our beloved Veterans. We couldn’t be happier having Jim representing WCSX and our team!”