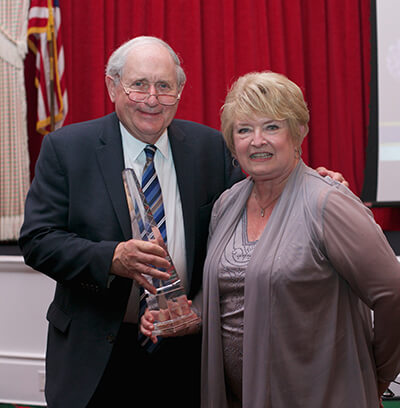 Former Sen. Carl Levin (D-Mich.), a 36-year veteran of the Senate has died at the age of 87. The Levin Center at Wayne State University announced the late senator’s death Thursday evening, calling him “a dearly beloved husband, father, grandfather, brother and uncle, and life-long public servant.”

In 2014, Levin was presented with the MAB’s Lifetime of Distinguished Public Service Award at our Annual Conference at the Grand Hotel, Mackinac Island.

In his 36 years in the Senate, Carl Levin was one of the nation’s most respected leaders on national security, a powerful voice for equality and justice, and a fighter for economic fairness. TIME Magazine has named him one of America’s 10 best senators.

In the Senate, he had been a member of the Armed Services Committee. From 2001 to 2003 and again from 2007 to 2015, he was the committee’s chairman. He focused on taking care of the men and women of our military and their families, supporting much-needed pay raises and improvements in treatment and other policies for wounded warriors. He led oversight efforts to improve efficiency and reduce cost overruns in expensive weapons programs.

Senator Levin’s legal background was evident in another thread that runs through his career: tough, vigilant oversight of powerful institutions in government and the private sector. He was chairman of the Senate Permanent Subcommittee on Investigations. He led investigations of the 2008 financial crisis, abusive credit card practices, the Enron collapse, speculation in energy and food markets, abusive offshore tax havens and money laundering by corrupt foreign leaders.

After deciding not to run for a seventh term in 2014, the Levin Center at Wayne Law was established to promote fact-based, bipartisan oversight by Congress and state legislatures and to encourage civil dialogue on public policy issues. He chaired the center and co-taught law courses. He also was a partner and distinguished counsel at the Honigman law firm in Detroit.

Levin is survived by his wife, their three adult daughters, Kate, Laura and Erica, and several grandchildren. There will be a private funeral. Information about a public memorial will be forthcoming.