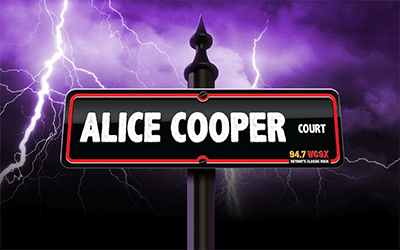 The official ceremony will include remarks by Big Jim and remarks from Alice Cooper, who will attend the unveiling prior to his performance at the DTE Energy Center September 25. It will also feature a performance by Alice Cooper cover band, “The Nightmare.”

“From Glenn Frey Drive to Bob Seger Blvd, we’ve tried to celebrate great local musicians,” said Big Jim. “But never has an artist and location made more sense than Alice Cooper Court at Eloise Asylum. We can’t wait to celebrate Alice here in the Motor City!”

“Alice Cooper’s stage show features guillotines, live snakes and a strait jacket,” said Beasley Media Group Vice President of National Content and Director of Detroit Programming, Scott Jameson. “So, it’s only fitting we honor him with a landmark on the grounds of a century old Detroit area sanitarium. Some things just write themselves.”