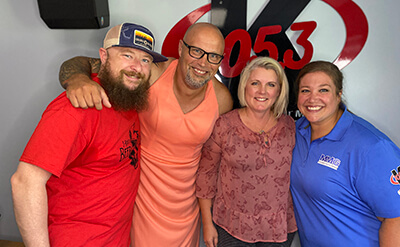 McKibbin Media Group’s WKHM-FM (Jackson) held its second annual Charity Radiothon July 30. The on-air talent of K105.3, Jared “J-Rod” Hammond, Scott Clow and Jenny Lewis, broadcasted live from the K105.3 studio for 13 straight hours, accepting donations while completing fun and intense dares from their listeners based on fundraising goals. This year, K105.3 set and exceeded the goal of raising $13,000 in donations from community members, which was split three ways ($4,333 each) to benefit the following causes:

“We can’t thank everyone enough who made a donation to the Charity Radiothon. Because of the generosity of so many we were able to hit our 13-hour goal of $13,000. Three great charities will benefit greatly from these donations, which wouldn’t be possible without our loyal clients and listeners,” K105.3 Drive at Five host Jared “J-Rod” Hammond said. “Thank you to all who were involved in this wonderful event.” 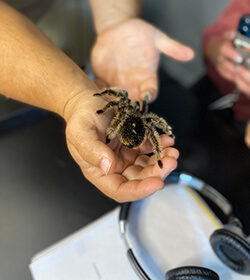 Among some of the dares the DJs completed live on-air Friday in exchange for donations were drinking a blended beverage containing prune juice, ranch dressing, trail mix and more; a blind taste test of various foods; getting their noses waxed by a student of Atlas Academy of Cosmetology; handling a live tarantula provided by Wild World Zoo; and more.

Each year McKibbin Media Group selects local charities based upon nominations from employees to split the total funds collected during the event. In 2020, over $12,000 was collected during the first Charity Radiothon in a span of 24 hours. Soar Café and Farms, Andy’s Angels, the Jackson Autism Support Network and the JDRF One Walk of Jackson were the recipients of these funds.