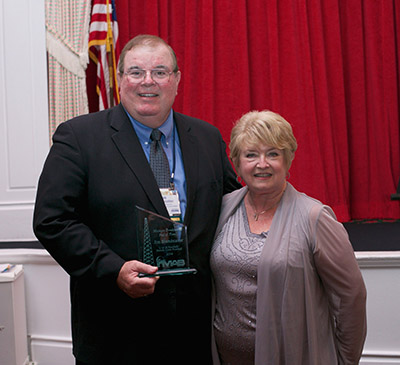 Jim Brandstatter with MAB President/CEO in 2014 following his induction into the Michigan Broadcasting Hall of Fame.

Prior to the start of the season opening Michigan Wolverine Football game on September 4, play-by-play announcer Jim Brandstatter and analyst Dan Dierdorf announced they both will be retiring at the end of the season.

Brandstatter has been heard on Michigan radio in some form since 1987. He was previously the color analyst while Frank Beckmann called play-by-play, but he shifted over to the play-by-play role in 2014.

“As Crash Davis said at the end of ‘Bull Durham’, we’re hanging ’em up,” Brandstatter said on the broadcast. “And that said, two words come to mind for me: thank you. And those two words are completely inadequate in expressing my sentiments to all of you who have been so supportive for over 40 years in my case.”

“It’s not about us, it’s about the players, the game, this stadium full of people,” said Dierdorf.

“We had a great run,” Brandstatter told The Detroit News. “I have had the best run of all. It’s been a dream job. Now, it’s time to move on and get somebody else in there.”

Both men also played for Michigan. Brandstatter was an offensive tackle from 1969-1972 and Dierdorf played from 1968-1970. Dierdorf is a member of both the College and Pro Football Hall of Fame.

Brandstatter was inducted into the Michigan Broadcasting Hall of Fame in 2014.