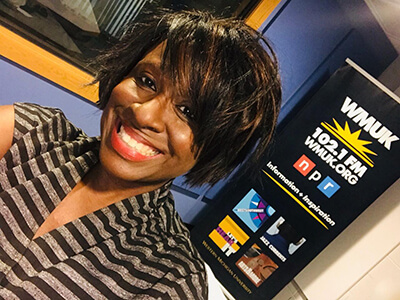 Western Michigan University’s WMUK-FM (Kalamazoo) announced that veteran journalist and local Morning Edition host Earlene McMichael is leaving the station after a 9-year run.  McMichael will be joining Kalamazoo Valley Community College as its Marketing Project Manager, effective November 1, where she will apply her journalistic skills to publications, social media and much more.

Over the years, McMichaels has managed to bring interviews to WMUK airwaves with major public figures, both locally and nationally. Among those figures were women’s rights champion Gloria Steinem, gender equity advocate Anita Hill, civil rights icon Julian Bond, famed astrophysicist Neil deGrasse Tyson and Gov. Gretchen Whitmer, to name a few. Another notable highlight was a live 40-minute-long onstage interview in 2017 with Sybrina Fulton, the mother of slain teen Trayvon Martin, in front of an audience of hundreds at Chenery Auditorium in Kalamazoo. The interview later aired on WMUK. It was subsequently recognized by the Michigan Association of Broadcasters’ annual Broadcast Excellence Awards with a second-place finish in the “Public Radio Best Public Radio Special or News Program” category.

McMichael took home three awards this year from professional news and broadcasting organizations–one at the state level and two at the national level. The Michigan Association of Broadcasters named Earlene’s series After the Protests, What Then? as Best Mini-Documentary or Series in Public Radio Group 1. The same package won Best Series during the national award program of the Public Media Journalists Association (PMJA). The PMJA also awarded her second place for Spot News for a story she did with colleague Sehvilla Mann titled Youth Protest Calls For End to Police Violence.

She was a regular contributor to the Station’s previously-run WestSouthwest and Arts & More programs. Prior to joining WMUK, McMichael had been an editor, reporter and columnist for many years at the Kalamazoo Gazette newspaper, where she founded a longtime journalism training program for high-school and college students. She was a radio news anchor in college.

Her last day will be October 22.  The station is currently seeking a replacement host.