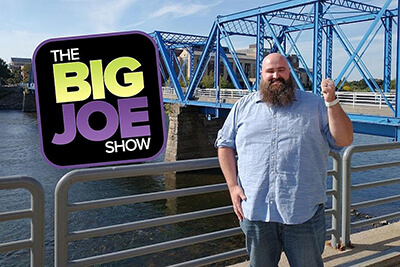 Pesh has extensive connections to West Michigan and the state.Originally from Howell, he began his career in Detroit. He was most recently heard in Grand Rapids as the host of the Morning Wake Up Call on WTNR-FM.  Since moving on from the station in 2014, he has found success in radio markets such as Evansville, Indianapolis and San Antonio.

Pesh said, “As a Michigan guy, I’m so excited to come back to the city I love! I worked for 7 years in Grand Rapids and fell in love with West Michigan and even found the love of my life, my amazing wife Lindsey. It feels great to be back home surrounded by family and friends. I can’t wait to start waking up West Michigan.”

Mix 95.7 Brand Manager, Ken Evans, added, “I can’t wait to hear what Big Joe brings to Morning Radio in Grand Rapids. While other stations have cut local mornings, plugged in syndicated shows, and let budgets drive their decision-making, I’m thankful that our local leaders like Doug Montgomery & Jeff Luckoff recognized the need to provide locally generated content for our audience.”

While we’re sad to see (former morning hosts) Fish & Christine move on, we wish them nothing but the best in their choice to take on new adventures. That said, we’re still looking for a co-host to join the team with Big Joe & Producer Steve. Those interested in the position can apply and find out more here: bit.ly/Mix957Mornings.