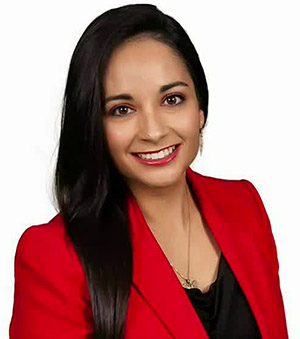 “We are thrilled to announce the promotion of Jennifer Perez to Chief Meteorologist,” said WLUC Vice President and General Manager Rick Rhoades. “Jennifer has played a key role in leading our weather team over the last 4 years. Jennifer’s work ethic and passion for weather are second to none and I am extremely proud of her on this achievement. I’m excited for our viewers, the community and our entire team here at TV6. Jennifer is going to shine!”

TV6 News Director Andrew LaCombe agrees. “I had the privilege of working alongside Jennifer every morning for three years, and I saw her grow as a meteorologist and leader at our station. Jennifer is one of the hardest-working people I’ve met in the TV industry,” LaCombe said. “She loves the U.P. and truly cares about the people here. Her work ethic comes across every day. Jennifer will also be an exceptional mentor for other members of our growing team, and she has shown that already. The U.P. is very lucky to have Jennifer as its Chief Meteorologist.”

Perez was born in Puerto Rico and raised in sunny Jacksonville, Florida. Growing up in Florida she loved watching thunderstorms. While touring her local weather department she realized her future was in meteorology.

She earned her bachelors at the University of Central Florida and started her career at WLUC-TV6 as a news reporter in 2012. During that time, she went back to school for meteorology.

After a three-year stint at TV6, she transitioned to a weather position with TV6 sister-station, WILX-TV in Lansing. By May 2016, she graduated from Mississippi State University with a Bachelor of Science in broadcast meteorology and made her next big move to the Ozarks. It was at KSPR in Springfield, Missouri that Jennifer came into her own covering severe weather. Eventually, she traded tornado alley for the winter storms of Upper Michigan.

Upon returning to the U.P. in 2018, Perez hit the ground running at TV6 earning recognition from the Michigan Association of Broadcasters in 2018, 2019 and 2020. In 2020 she earned her National Weather Association Seal of Approval.

“I am humbled by the opportunity,” she said. “This is a huge honor on its own, not to mention the added privilege of being the first female chief in the history of TV6. It’s something I’ve been dreaming of and working hard for over the last several years. The U.P. has truly become my home. I love the area and the people within it. Looking back on my journey I am reminded amazing things happen when you always look for the rainbow.”