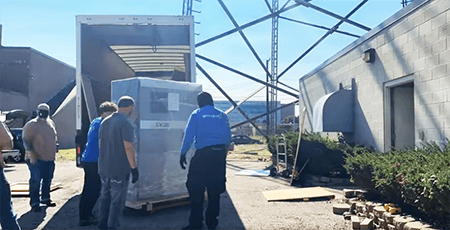 Wayne State University’s WDET-FM (Detroit) has announced that it has put their new replacement transmitter on the air this past Tuesday (10/19).  The station reported earlier this year that both its 21-year-old transmitter had failed and its 34-year-old back-up transmitter was having severe issues, compromising sound quality and endangering broadcast continuity. WDET knew the equipment was past its prime but had hoped to extend the life of the current equipment as it raised the funds needed to purchase new technology.

The new transmitter was funded by the city’s Kresge Foundation.

Most of the station’s listeners are still tuned to FM as opposed to its internet stream, according to WDET General Manager Mary Zatina. “About 80% of our listening happens on traditional radio,” Zatina told the Detroit News. “While people might have been well-intentioned to think about a digital future, we’re not there yet.” Although the station has made significant investments in podcasts and music on demand, and hiring staffers to oversee them, Program Director Joan Isabella says, “Lots of people [in Detroit] don’t have Wi-Fi in their house, [or] internet [or] access to broadband.”

The money for the $150,000 transmitter, replacing equipment dating as far back as 35 years, was originally to come from WDET’s fundraising, which raised $47,000 from listeners impacted by the signal issues, until Kresge stepped in. The foundation’s Managing Director for its Detroit Program, Wendy Lewis Jackson, says springing for the station’s transmitter “was an easy decision,” given the stature of WDET as a local voice delivering cultural information and discussions of important issues. As it turned out, the money the station raised covered other expenses such as labor, fire extinguishers, cooling equipment and digital radio metadata to identify songs played.

With the new transmitter, the station is also able to resume HD broadcasts.  The signal should provide a clean and crisp audio experience to listeners thoughout  WDET’s coverage area.