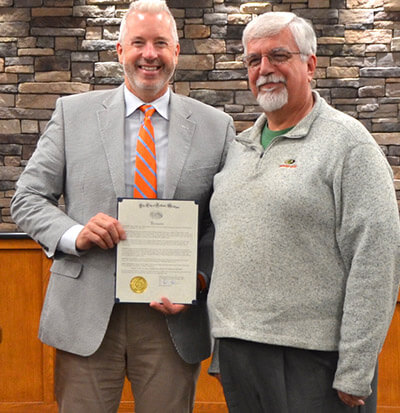 On October 6, the Holland City Council honored WHTC-AM/FM (Holland) Morning and Midday host Gary Stevens (real name Gary Ratski) with a resolution declaring October 15, 2021 as “Gary Ratski Day” in Holland.  The date coincides with his 20th anniversary at WHTC.  He’s been hosting the morning news show for five years and the station’s legacy show, Talk of the Town, since 2019.

Stevens is just the fourth host of Talk of the Town in the program’s 62-year history.

Presented during a city council meeting, Stevens was surrounded by co-workers and family.  Stevens’ work has been honored by the Michigan Association of Broadcasters’ 2011 Best in Category for Broadcast Excellence award, which honors exceptional content, presentation, and production in radio programming for his May 5, 2010, tribute to Ernie Harwell won. It’s one of four such MAB awards earned during his WHTC career.

Steven’s on-air career started in Detroit, then to Saginaw, Lansing and then to Holland.