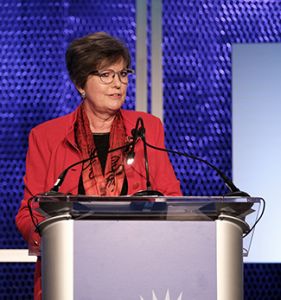 Rossman-McKinney began her career as a legislative secretary in 1979 and worked in both the Michigan House and Senate before joining the administration of former Governor James Blanchard to serve as the communications director for the newly created Michigan Youth Corps. Blanchard promoted her to run the program and she went on to lead Blanchard’s Office of Michigan Products, tasked with showcasing Michigan-made goods to the world.

In 2011, Rossman-McKinney, a Democrat, joined forces with Republican John Truscott to form Lansing-based Truscott-Rossman, one of the state’s most successful public relations firms.  Upon retiring from the firm in 2018, and following an unsuccessful run for the state Senate, she served until her death as Communications Director for Michigan Attorney General Dana Nessel.

“I am heartbroken by the loss of one of my most trusted advisors and I am honored to count myself amongst those who had the good fortune to work alongside Kelly and to witness her artistry,” Nessel said in a news release. “Kelly forged deep relationships with so many of her colleagues at the Department of Attorney General, and her loss weighs heavy on all our hearts tonight.”

“Kelly left this world the way she lived in it – bravely determined, inspiring all those around her with her courage, wit and humor,” Truscott said in a statement. “We will miss her tremendously. Throughout her 45-year career, Kelly became one of Michigan’s best-known, highly-respected and most-accomplished communications experts. There never has been and never will be another Kelly Rossman-McKinney. She shattered the glass ceiling for women in Lansing by taking risks – risks she understood and committed to because she knew what challenges were, and she faced them head on.”

Rossman-McKinney may be remembered by MAB members for her involvement with the association.  Rossman-McKinney was emcee at the MAB’s Broadcast Excellence Awards in 2013.  In 2011 and again in 2015, she was co-anchor of MAB’s statewide TV coverage of the inauguration of Governor Rick Snyder’s two terms in office, broadcasting in the January cold from the steps of the Michigan State Capitol.  MAB President/CEO Karole White said that Kelly donated her time to the MAB.  There was no charge for any of her work.

Rossman-McKinney is survived by her husband, four children and stepdaughter.