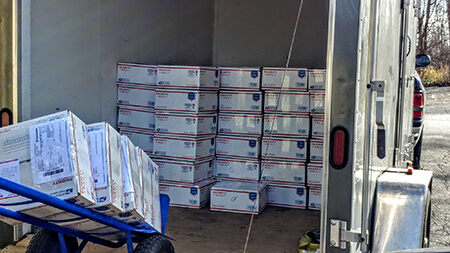 Boxes packed and loaded for shipping!

Now in its 8th year, WION (Ionia) Radio’s “Treasures for Troops” collected items on behalf of Blue Star Mothers Chapter #188 of Ionia, Montcalm and Kent Counties and was a success!

WION’s broadcast week was November 15th through 19th with broadcasts and call-ins from the Village Market of Muir, Young Chevrolet-Buick-GMC of Ionia and the Lowell Area Chamber of Commerce. The station reports that listeners had been inquiring-about and buying things for this drive since early Autumn.

Boxes are packed with donations collected in this yearly event, and include letters, cards and notes from Saranac, Ionia, Lowell students, Ionia area residents and others. Each box also contains three “staple” items of Peanut Butter, Chunky soup and some beef jerky, along with a variety of items from the needs list published locally each year.

The Ionia Moose Lodge once again hosted the storage, sorting and boxing of donations, which were then prepared for mailing from the Saranac Post Office.

This year, 186 boxes were mailed to active military members deployed far from home. The boxes will be a surprise to most recipients, however some addresses were provided to the Blue Star Mothers by families and friends of the deployed.

Major donations for postage were received from Reurink Roofing & Siding Sales of Ionia and Herbruck’s of Ionia, with many individual monetary donations from WION listeners, advertisers and the public in Ionia and Kent Counties. This year, Lowell High School Radio WRWW-92.3FM and Lowell Schools contributed over a full S.U.V. load of donations to the cause, for which WION and the Blue Star Mothers are grateful. Special thanks goes to the Lakewood United Methodist Church Youth Group of Lake Odessa who held a special drive for the project and donated multiple large boxes to Treasures for Troops!

Jim Carlyle, WION’s Manager and Mid-morning co-host said, “While thanking everyone who gave their time, money, items, or in any way contributed would be impossible, WRWW-LP and Lowell Area Schools, The Lowell Area Chamber of Commerce, Ionia Moose Lodge, Young Automotive of Ionia, Ionia Public Schools, Saranac Area Schools and event organizer, WION Radio of Ionia and Lowell want those who helped in any way to know we’re grateful and very honored to be part of such generous communities in West Central Michigan. Thanks to donors and volunteers, 186 members of our Military know that people in our area support and care for them…while they’re far away from home” 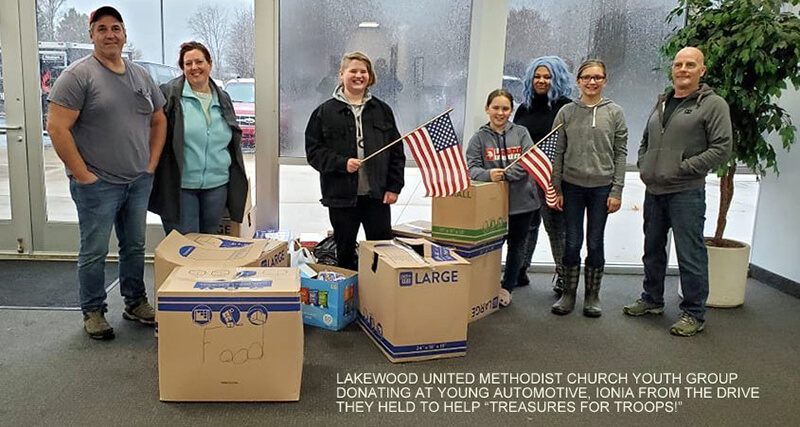