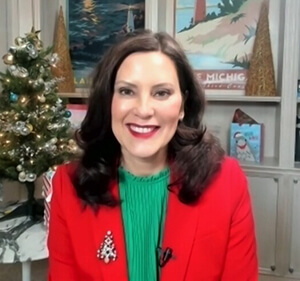 The special edition episode of the weekly public affairs program is available for streaming now in the free PBS App on many streaming devices and smart TVs and at video.wkar.org.

The Off the Record special edition “Evening with the Governor 2021” airs in mid-Michigan Fri. Jan. 7 at 8:30 p.m. ET on WKAR-TV (check local listings).

WKAR writes that “rarely do we get a chance to see the governor in a relaxed format in which she discusses pressing state issues and offers a personal reveal on how important being governor is to her.”

On the school gun safety question, Whitmer talks about the possibility of endorsing a statewide petition drive to quell gun violence in our schools. “The public wants us to do something,” says Whitmer, and if the GOP legislature does not play ball, she has not ruled out letting the voters decide the issue on the ballot later this year.

Whitmer and anchor Skubick also revisit the national story about her almost becoming Joe Biden’s vice presidential pick, with a new angle added to the saga.

Also during this conversation, the governor offers a ranked list of ten important aspects of her personal life. You may be surprised where serving as Michigan’s chief executive lands on that list.

Joining the program for a final segment is First Gentleman Dr. Marc Mallory. He was totally off the grid during 2021, having hung up his drills as a dentist after 35 years. He reveals what he’s been doing and the governor reveals how she is doing, having him around the house all day long. Mallory has done only three TV interviews since his spouse became governor, and all of them have been with Skubick on this broadcast.

It’s fast-paced, informative and entertaining as Michigan’s 49th governor and the state’s longest serving capitol correspondent weave thirty minutes of must-see TV. It’s a tradition that began in the 1970s with Gov. and Ms. Milliken continues in 2022.