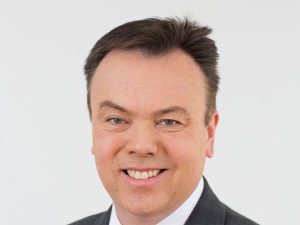 After 31 years in television, all of it in West Michigan, WZZM-TV’s (Grand Rapids) Brent Ashcroft has retired from the business to pursue a second career as a buyer and seller of coin collections.  The station made the announcement on December 23.

“It’s been quite the 31 years in the West Michigan TV business,” said Ashcroft. “The last full-time job I had that wasn’t in West Michigan TV was in the summer of 1989 when I was a lifeguard at Pleasure Island Water Park near Norton Shores where I grew up.“

Ashcroft created his signature franchise, “Our Michigan Life,” which set out to tell unique stories that capture viewers’ attention and make them feel. From shipwrecks, to 103-year-old yoga instructors, to athletes overcoming adversity, to a former heroin addict seeking atonement for selling the drugs that killed his best friend, his stories have had a lasting impact on viewers.

“Brent’s stories ran the gamut of human experience. They were curiously interesting. They made you laugh, they made you cry, some even made you laugh so hard you cried,” said Julie Flynn, WZZM’s News Director. “His contributions to the newscasts will be missed.”

Ashcroft’s storytelling earned him 65 Michigan EMMY nominations, including 30 EMMY wins. He’s also won 9 “Edward R. Murrow” awards, including a National Edward R. Murrow award in 2016 for his story entitled, “Big Ann,” about a local student-athlete, AnnaLee Konsoer-Rose, who was fighting for her health during her senior year of high school after a rare diagnosis.

“People recognized the great work he was doing,” said Dan Baylog, President and General Manager of the station. “You always can tell a Brent Ashcroft story when you see it.”

“My story is a unique one for this business,” said Ashcroft. “I’ve spent my entire career here in West Michigan. You never hear that kind of thing in the TV industry. But this is my home. And I am proud I was able to tell stories about it.”

Ashcroft started his West Michigan TV career during his junior year at Grand Valley State University. He was hired as a sports intern by the late Warren Reynolds at WOOD-TV. After graduating, he landed his first full-time TV job at WZZM TV as a news photographer. Less than three years later, the sports desk called, and Ashcroft got his start as a sports anchor/reporter. Six years later, he became Sports Director of WXMI-TV in Grand Rapids, covering many major sports events.

In June 2010, he bookended his career with a return to WZZM where he was able to dive deep into the storytelling that made him stand out.

As for the next chapter of the story, he will be writing it as he joins a friend at Grand Rapids Coins, a national and international buyer and seller of coin collections and precious metals.

“I’ve always been a history buff and few things possess more fascinating history than old coins, I’ve learned,” Ashcroft said. Together, they will be opening a storefront in Rockford in 2022.