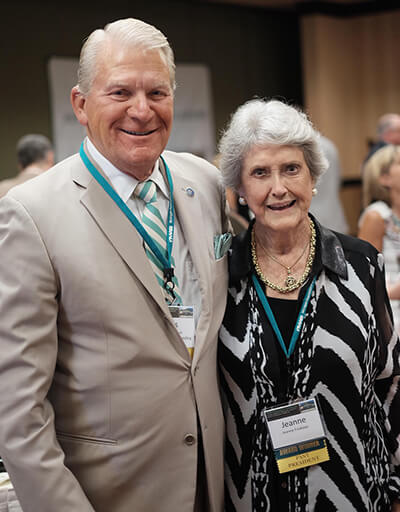 Ross Biederman with Jeanne Findlater at the MAB Summer Advocacy Conference in 2015.

Former WXYZ-TV Vice-President and General Manager (1979-1987) Jeanne Findlater recently penned an op-ed piece for the Detroit Free Press celebrating the elevation of women to key roles in media and other corporate environments.  Headlined “One responsibility of women leaders in the 1980s – don’t spoil it for other women.”  In her post, Findlater writes about how she cheered when after 98 years the Walt Disney Company, in December, finally chose a woman. Susan Arnold, to chair its board, replacing the retiring Robert Iger. She adds that Arnold “has a tough job in a complex industry. Her goals and strategies will be judged on their merit, not because of her gender.”

Findlater also shares that she had the same joy when Mary Barra became CEO of General Motors and that, “I celebrate the vastly improved attitudes that have allowed women to be presidents of movie studios, publishing houses, broadcast stations and cable companies. It’s a mighty change from four decades ago.”

She also writes about her own career journey in a much different era: “In 1979, ABC named me Vice-President/General Manager of Channel 7 (WXYZ-TV), making me the first woman in the U.S. to head a TV station in the top 10 markets (Detroit was No. 7) or in an ABC, NBC or CBS-owned station.  I was qualified. That is not why I was promoted. ABC needed a woman. The National Organization for Women had inspired class action suits and were talking to broadcast companies about their promotion practices. ABC wanted to pre-empt them. I was the only female department head in sales, news, programming, finance or engineering in New York, Los Angeles, Chicago or San Francisco.

“Mary Barra and Susan Arnold made history in being the first women in these prominent jobs, but I doubt their performance will be measured by their gender. That was not true in my day,” Findlater writes.

She shares her own examples of  how women open the door to other women.  “When our general sales manager retired, I knew about Grace Gilchrist, who could write the manual on sales and leadership. I found her in Atlanta, and hired her as our first female general sales manager. She eventually became general manager of Channel 7. She, in turn, hired the marvelous Marla Drutz from Channel 2 (WJBK-TV) and made her program director. Later, Channel 4 (WDIV-TV) lured Drutz by making her vice president and general manager. She followed Amy McCombs who went to Channel 4 (KRON-TV) in San Francisco.”

“It took decades to prove the wheels won’t fall off the car when a woman is in the driver’s seat.”

Jeanne Findlater served on the MAB Board and was named Board President in 1984.  In 2015, she was honored with the MAB Lifetime Achievement Award during ceremonies at the MAB Summer Advocacy Conference.  Former MAB President/CEO Karole White said, “Jeanne was immediate Past President when I was hired. She was beyond elated that the mostly-male committee hired a woman. She was very instrumental in getting me introduced around Detroit Media and metro important people.”