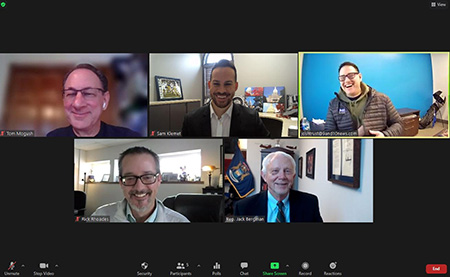 The Michigan Association of Broadcasters are proud to work on behalf of our members to educate Congress and state lawmakers about the issues that impact our industry.

Over the past two weeks, the MAB and representatives from stations across the state have met with multiple members of Congress and their staff.

Michigan currently has seven co-sponsors of the Local Radio Freedom Act (H. Con. Res. 33) which calls for no new performance fee. It has garnered the support of a majority of the
House of Representatives in successive past Congresses and is nearing that threshold again.

We appreciate the support of:

The MAB is asking all Michigan representatives and Senators to lend their support and sign on as co-sponsors to the legislation will ensure the strength of local radio which has been critical, especially during the pandemic, with providing local information and helping promote businesses.

Additionally, the MAB is asking members to support the Local Journalism Sustainability Act which provides a tax credit for hiring and retaining local journalists and the Journalism Competition and Preservation Act (H.R. 1735) that will allow broadcasters to negotiate with digital platforms regarding the terms and conditions by which their content may be accessed online.

The MAB will continue to meet with members throughout the month not only talking about legislative issues, but sharing the impactful work of broadcasters throughout the state – not only the information shared on air, but the community service initiatives that are the foundation of local TV and radio.