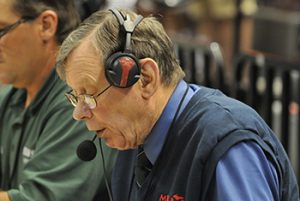 Eric O. Furseth, legendary radio personality and the voice for both MSU Athletics and Michigan High School Athletics, passed away this past Monday (2/28) in Traverse City.

Furseth initially came to Michigan State University in the early 1950s on a full-ride scholarship to play football for Clarence “Biggie” Munn, but after suffering an injury in his first fall with the Spartans his path led him to the Spartan basketball team. After college, he spent two years in the U.S. Air Force.  He joined WILS-AM in Lansing in 1956 as “Erik O. on the Radio.”

The “O” stood for Olaf. Furseth’s parents are from Norway. “Erik O” was a smooth radio name early in his career when he was filling in for mentor Dave Froh – “Erik O for Dave Froh” – so it stuck.

“He was the number one disc jockey in this area before they were called disc jockeys,” said Lansing WILX sports director Tim Staudt in a 2013 interview. Furseth later moved into management at WILS.

A celebration of Furseth’s life will take place Monday, May 16, 3:00 PM, at Reynolds-Jonkhoff Funeral Home in Traverse City. Visitation will begin at 2:00 p.m..