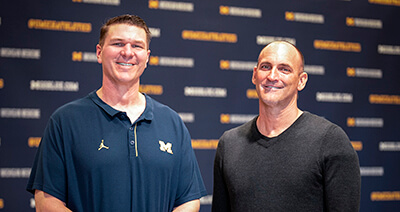 On Tuesday (3/8), the University of Michigan announced that Doug Karsch and Jon Jansen will serve as Michigan’s radio broadcast team for the 2022 football season.  The pair replace Jim Brandstatter and Dan Dierdorf, who announced their retirement following the 2021 season.

“Doug and Jon are a great team and will bring their passion for Michigan Football into the modern era of radio broadcasts,” Kelsey Harmon Finn, Vice President and General Manager, Michigan Sports Properties, said in a press release. “While Dan and Jim leave big shoes to fill, we are confident that Doug and Jon will deliver to fans an informed and entertaining broadcast about today’s team while still honoring the program’s traditions and history. We are excited about the season ahead.”

“A great partnership has been formed between Doug and Jon and we look forward to that continuing as our football radio broadcast team moving forward,” Michigan athletic director Warde Manuel said in a release. “We have the No. 1 rated pre-game radio show for a reason; it’s the chemistry, passion and knowledge that Doug and Jon bring to their work. They take tremendous pride in entertaining and informing our fans about our team, coaches and all that involves Michigan Football. Their historical knowledge, relationship with past and present Wolverines makes this a seamless transition in the radio booth.”