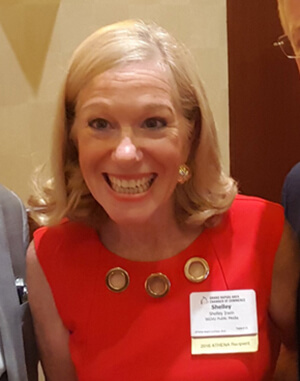 WGVU Public Media’s Shelly Irwin has been named in the 2022 class of the 50 Most Influential Women in West Michigan by The Grand Rapids Business Journal.  The honorees were announced in February and were celebrated at a special luncheon on March 10.

The honorees represent a wide cross section of industries and organizations and are leaders in the West Michigan business community. This is the 25th time the Business Journal is celebrating the 50 Most Influential Women in West Michigan.

Irwin is the host and producer for The WGVU Morning Show on WGVU-FM, a position she has held since 2001. The show, broadcast from 9 a.m. to 11 a.m. features a wide variety of local and national newsmakers, plus special features.

She also hosts several public affairs program on the TV side, including Family Health Matters and Kalamazoo Lively Arts. Shelley is award winning in her profession, including five consecutive Gracie Allen Awards from American Women in TV and Radio for excellence as a program host. She was awarded the 2016 Athena Award, honoring an individual who has demonstrated leadership in their profession, mentored and opened new opportunities for women and contributed time and talent to the community and the Rotary of Grand Rapids’ Service Above Self award, given in recognition of Frederik Meijer, whose humanitarian acts of selfless service made an enduring difference in the lives of others.

Her community involvement extends from the Kent County Park Foundation to the Michigan Women’s Foundation, Hope Network, Girl Scouts and the Cherry Health Foundation, among others.

See the complete list of the 2022 Class of the 50 Most Influential Women in West Michigan here.