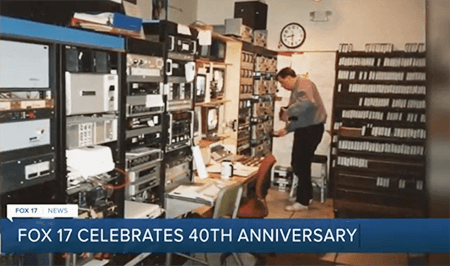 Scripps Media’s WXMI-TV (Grand Rapids) celebrated its 40th Anniversary this month!  The station signing on as an independent station on March 18, 1982 under the call letters WWMA-TV.  It became WXMI-TV in 1983 and four years later joined the FOX television network.

WXMI-TV General Manager Kim Krause said in a statement, “It’s incredible to think about how far this station has come. What began as a relatively small, independent station on March 18, 1982, has blossomed into the station that provides more local news than any other station in the market. FOX 17’s growth and impact on the community are a testament to every employee who’s ever worked here. I’m very proud of the current FOX 17 team, and I know all of us feel a sense of pride and duty when we stop and consider that we’re part of a larger group of people who have made FOX 17 the station it is today.”

Throughout the decades, dedicated and hardworking people have worked at FOX 17, from on-air talent to photographers, directors, news directors, producers, studio techs, salespeople, engineers, and many other supporting people behind the scenes.  See the station’s birthday announcement from March 18 here: