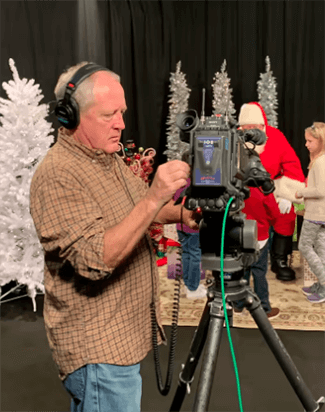 Longtime WDIV-TV (Detroit) staffer Kevin Ward just retired after 40 years, working as a photographer, cameraman and editor.  Ward was asked by WDIV Digital Content Manager Ken Haddad, to share some reflections and memories on his career at the station.

In a WDIV Insider Exclusive, Ward writes, “My employment at Channel 4 began within the campaign that had as its theme: GO 4 IT! And we did. In those days, we took on yearlong commitments to community causes. In the case of the winter of 1982, we were in the middle of trying to help the viewing public cope with very high unemployment amidst a flagging economy. My first documentary shoot, for example, was at the old Cobo Hall at a robotics convention held for the benefit of formerly employed auto workers.”

Ward goes on to write about working with horror movie host Count Scary, WDIV’s original building at 600 West Lafayette as well as the move down the street to the station’s current location.  At the new studios, he worked on shows like “Purtan’s People,” with Detroit radio personality Dick Purtan; global teleconferencing with Chrysler’s Lee Iacocca as well as Michigan Lottery broadcasts orginating around the state.

He also writes about the many documentaries he participated in, his favorite being “Risky Business: Iron Boat, Iron Men.” This project took him aboard the “Benson Ford” to document every moment of an ore run from the Ford Rouge plant to Marquette and back.