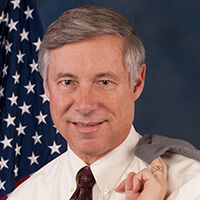 U.S. Representative Fred Upton, former Chair of the House Energy and Commerce Committee and longtime supporter of local broadcasters, announced Tuesday (4/5) that he was stepping down after his current term. “Even the best stories have a last chapter,” said Upton, (R-St. Joseph). “This is it for me.”  Upton has been in Congress since 1986.

The Detroit Free press writes that while the timing came as a surprise, it was widely suspected that Upton might decide not to run for another two-year term, especially after an independent redistricting commission redrew district lines that put both he and U.S. Rep. Bill Huizenga, (R-Holland Township), in the same district.

Former President Donald Trump endorsed Huizenga a few weeks ago and had vowed to try to unseat Upton after he, along with nine other Republicans, voted to impeach Trump for instigating the Jan. 6, 2021 attack on the U.S. Capitol.

Upton was honored by the Michigan Association of Broadcasters in 2015 with its Lifetime of Distinguished Public Service Award.  This award is bestowed upon Michigan public servants who have proven to be friends to the broadcast industry and champions of the “fourth branch of government.”