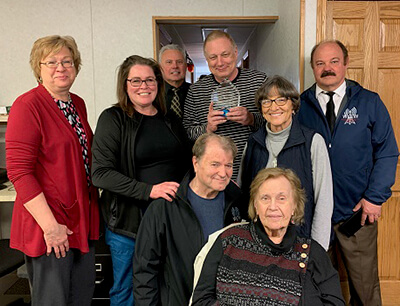 WLEW-AM/FM (Bad Axe) News Director Craig Routzahn signed off for the final time following the station’s 1 p.m. newscast last Friday (4/1).  Routzahn holds the record as the longest serving continuous on-air personality at the station with 46-1/2 years behind the microphone.

Routzahn joined the station in the fall of 1975, hired by Station Manager Tom Meyer. He started on-air as a mid-day disk jockey in September 1975, learned to write and produce commercials and was given the morning show and Ladies Line program. After a few years, he was promoted to the Night News shift, and in early 1984 was promoted again to News Director, a position he held until this past Friday.

In submitting his retirement notice, Craig thanked owners Ric and Matt Aymen for allowing him to continue in a traditional news format in spite of changes in the industry that have “blurred the distinction between news and opinion.” Earlier this week, Huron County Sheriff Kelly J. Hanson presented a certificate of appreciation aton to Craig from the Huron County Sheriff’s office.

WLEW’s Ralph Iden told the Huron Daily Tribune that Routzahn’s unwavering commitment to reporting all sides of the story has been a hallmark of a long, successful career. He’s also been a team player, picking up an occasional DJ shift when needed.

“He hasn’t wavered from the idea of getting balanced viewpoints,” Iden said. “He has done his level best to adhere to that during his time at WLEW.”

Routzahn added, “I’ll miss the people. I’ve made a lot of good friends. I just want to thank everyone for the (good) wishes.”

Read more about Routzahn’s retirement on the station’s website here.