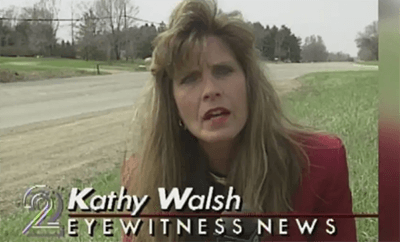 Former WJBK-TV Reporter Kathy Walsh has lost a battle with Huntington’s Disease and passed away April 14 at age 63.  Walsh, a reporter at the station in the 1990s, had a reputation for her fearless tenacity. It was just the kind of fighting spirit she would need years later as she battled Huntington’s Disease.

“She was just a brave, tough fighter – I know she gave it everything she had,” said WJBK-TV News Director Kevin Roseborough. “She was kind enough to actually really help people understand what Huntington’s was by sharing her struggle. She was just a joy to be around, she was funny – a very smart person -a lot of fun,” he said. “I know she had a very difficult battle with Huntington’s. I know she approached it with the same kind of strength she brought to the job here. My condolences go out to Don, Carson and the rest of her family.”

Walsh, along with her husband, Don Peasley, and son, Carson, have been sharing her story since 2017.  “The vision is a world without Huntington’s – but until we get there – raising funds locally to take care of the families here in Michigan is what we really try to do,” Peasley told WJBK.

The station aired and posted a tribute to Walsh here:

The family is asking for donations to be made in her honor to the Michigan Chapter of the Huntington’s Disease Society of America. Find it online at: michigan.hdsa.org.