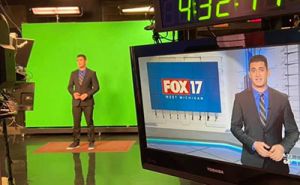 Scripps’ WXMI-TV (Grand Rapids) has announced the debut of FOX 17 Unfiltered! The show takes a unique approach to connect with viewers and their community, focusing on the positives.

The show, hosted by Max Goldwasser, goes below the surface to bring viewers to the heart of every story.

Most of the stories featured will fall under four themes:

Moving through the Mitten: A fun way to highlight both well-known and hidden attractions across the state, telling the story behind them on a deeper level than viewers would see in a typical feature piece.

You Got Served: West Michigan has such a diverse food scene. Backstories of restaurants and their owners while having plates filled with great food in the process.

Did Ya Know?: Helping viewers learn more about the area they live in by uncovering a piece of history, or by highlighting a unique angle of a familiar story.

Stories from the Sidewalk: An unscheduled conversation in a West Michigan neighborhood. Host Max Goldwasser sets up a table on a sidewalk, with an open chair and open mic next to him, inviting people to take a seat. Everyone has a story – you just have to ask the right questions.

FOX 17 Unfiltered! debuted on July 18 and is seen weeknights at 7pm.